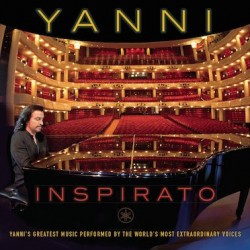 The album’s tracks are based on selected songs from throughout Yanni’s career, but have newly-created lyrics sung by distinguished vocalists having opera backgrounds. The dominant language of the album’s lyrics is Italian. The album, with its lyrical and classical elements, was characterized as reflecting a radical change in Yanni’s style. Despite the album’s use of opera singers, Yanni emphasized the album was “not opera.”