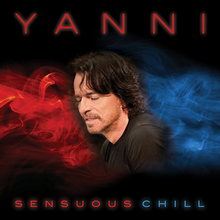 Sensuous Chill is the eighteenth studio album by contemporary instrumental musician Yanni, formally released on January 29, 2016.
On December 18, 2015, Yanni announced that Sensuous Chill would be released on January 29, 2016. At the same time, he released his first single “Desert Soul” on Youtube.
The album’s third track “Drive” is a remix of “Looking Glass” in the 1986 album Keys to Imagination.
Yanni explained to NPR that the album, which took five years to create, had tracks whose selection and ordering were designed to be “consistent” rather than “demanding” for the listener.